Industrial Monitors for the Sanitizing of Medical Tools in a Hospital

Monitors for a hospital? According to our opinion, this can only mean one thing: Our monitors with touchscreen would be used for the medical monitoring of patients. We were, however, far off the actual field of application. We became hesitant, when the customer asked for monitors that complied with the IP65 degree of protection. And not just with the housing, but also with the connections. They were to be used in a sanitation system for medical tools.

A Sanitation System for medical Tools in Hospitals

First we thought that we had heard incorrectly. Why would a hospital require a sanitation system? But the thing was quickly explained to us. In hospitals hygiene is of paramount consideration. Not for nothing, but as our ancestors were able to learn in a painful manner, the mortality rate rises with lacking hygiene in the medical field. Because no one wants to check into a hospital in order to die, nowadays everything must be maintained as sterile as possible. This includes medical tools, such as scalpels, scissors, tweezers and all the other things we can’t think of right now. According to the laws, these tools must be thoroughly sanitized after every use.

In most hospitals, there are cleaning and sanitation systems for this, sometimes even one per floor. In this cleaning systems, the tools are pre washed and then cleaned in a sanitation device at at least 70 degrees Celsius. After that the tools are sterilized, which happens at 130 degrees celsius. Only after this step, can the tools be used on patients again.

IP65 Industrial Monitors for the Sanitation System in the Hospital 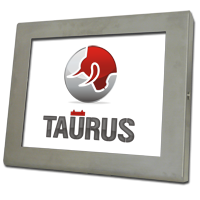 So that every step in the sanitation system can be separately controlled, we delivered an Industrial Monitor from our Taurus Series for each segment. On the backside of the monitors, there were screw in, waterproof connectors as per the IP65 guidelines. Additionally, we delivered the cables that also followed the IP65 guidelines and onto which the connectors could be screwed. With these special monitors, where the cables that are connected to monitor need to be waterproof, one thing needs to be considered: conventional USB plugs can not be sunk into the monitor, because that would void the IP65 protection.