No matter which type of plug, a connection is always possible

First off,  we would like to mention that the important aspect of reception is not the plug, but the input signal. It does not matter via which plug connection the signal is transmitted. We can work with most of the signals (including special timing) – for example from a BNC plug to a DVI plug, or a pin connector to VGA. This way, it is possible to connect even older machines with newer components.

At this point, we would like to list a few possible connections for video, that are especially used in the industrial sector. This list, of course, is not complete, due to the fact that manufacturers also use a variety of plugs. Especially in the area of the Sub-D plugs, to which the VGA plug also belongs, we constantly find exotic versions that were developed for special environments. For this reason we list a selection:

VGA plug is a three row, 15 pin HD-Sub plug, that transmits analog signals and is commonly found in the industrial sector.

DVI plugs are employed in the industrial sector, primarily for the transmitting of digital signals. Analog signals can also be transmitted with this plug.

BNC plugs are often found in the industrial sector in the monitoring of production processes. Normally the plug is most commonly used for the transmission of composite video signal (FBAS). 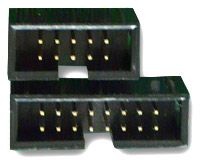 Pin connectors were primarily used in the 80’s, when TTL signals were transmitted to monochrome monitors. These plugs can also still be found to this day.

HDMI plugs are currently rarely used in the industrial sector. That could change though in the coming years, because these plugs are becoming a standard in the domestic sector.